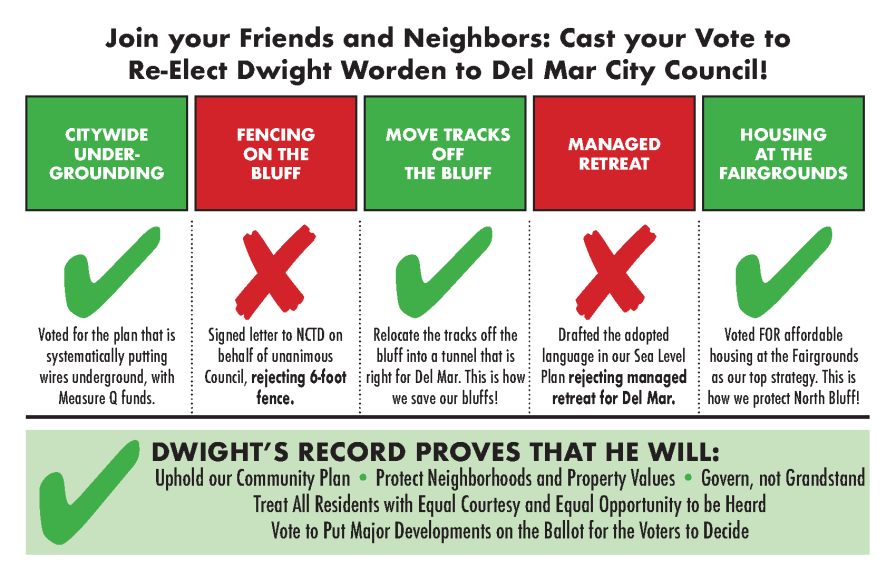 Del Mar is making progress on key priorities. Dwight is proud of his role in advancing all of these:

Dwight has helped Del Mar succeed on many important fronts over the decades: his early work on the Del Mar Community Plan, protecting the beach as author of the Beach Preservation Initiative, assuring the right to vote on large downtown developments and on Marisol (Measure G), and more. His prior service as City Attorney, as an environmental lawyer, and more recently on council and as Mayor, are all put to good use as we deal with complex problems. The future for Del Mar is bright with the right leadership. Dwight have the knowledge, the experience, and the proven commitment to guide Del Mar in your interest as we face a challenging and complex future.

Dwight’s Record on the Environment

Climate Action Plan: Worked to create Del Mar’s Climate Action Plan, and voted for its adoption (2016), to shift to carbon-neutral energy sources, reduce water use and waste sent to the landfill, and make wise transportation choices.

Clean Energy Alliance: Worked to establish and launch the CEA, resulting in cleaner, greener energy for Del Mar. Has chaired the CEA’s Community Advisory Committee since its inception.

The Beach Preservation Initiative (BPI):   Drafted the BPI, approved by the voters in 1988, which protects public access to the beach and shoreline. As special counsel to the City of Del Mar, successfully defended numerous lawsuits against the BPI and the City, resulting in the return of over 66,740 sq ft of beach to public use and the removal of private encroachments, while protecting private property through BPI-compliant seawalls.

Drafted Measure B, approved by the voters in 1986, requiring that any downtown commercial development or redevelopment of more than 11,500 square feet be put to a public vote. Measure B resulted in notable improvements in two key projects: the Del Mar Plaza and the the Del Mar Hotel (now L’Auberge).

An environmental activist since the 1970s: Dwight has been deeply involved in environmental protection since his law school years. Even before he graduated from USD School of Law in 1974, as a member of “San Diego Coastwatchers,” he successfully challenged a Carlsbad beachfront development in 1973 under the recently-enacted Coastal Act. The appellate court’s published opinion noted that in “the strange, new world of legal protection for the physical environment and ecological balance,” Dwight was not a “busybody or intermeddler,” but was, in fact, an “aggrieved” person within the meaning of the Coastal Act, with standing to challenge the grant of a permit to the developer. Since that time, Dwight has been involved in virtually every significant environmental issue in Del Mar as an activist, volunteer, or attorney.